Bilingual has never been flawed to me. I love it from start to finish and prefer it to Very any day. The only flawed album for me is Nightlife which at the same time has some of my favourites too.
If I thought what you’d think I wouldn’t even be here.
Top

ype wrote: ↑Sat 17 Jul 2021, 1:17 pm I don't mind Metamorphosis and I love Electricity.
Nightlife was the first album that had tracks I really didn't like. Remember Boy strange?

Nightlife is the last PSB album that I experienced without the internet. Truth be told, I bought it out of loyalty more than anything and wasn't even that bothered about listening to it. They did seem to be down the dumper. Looking back, it's crazy that it was only their seventh studio album and they've subsequently released seven more! I wouldn't have imagined that at the time.

I've experienced every subsequent album in a different way because of the internet - hearing tracks when they leaked, etc. That definitely changes your perception of an album because you're listening to it in pieces and you're maybe less inclined to take against a song you dislike because you can choose not to play it.

And then thinking about it.....I used to listen to those early albums on cassette so again you experience it in a different way: less easy to skip tracks without rewinding/fast-forwarding/auto-reversing. Perhaps if I'd listened to Bilingual on cassette I'd have learnt to love Metamorphosis and Electricity too.

Love Bilingual, prefer it much to Very. Very had a production very much of its time. So it’s a bit dated. Loved the whole campaign the videos, sleeves and so forth. But the album itself has dated a bit, the production lets it down, not the songs itself.
Top

To me Very was their first flawed album, and Billingual just confirmed their decline, which continued with Nightlife and Release. Obviously all of these albums had some excellent songs, but compared to the first four masterpieces they were (much) weaker.

I remember standing at the Tower records at the listening station with the headphones on, checking out Billingual and thinking to myself “hmm, so this is it with PSB”. Fortunately better days came!

Though my father was a big fan, I was just the casual listener who only knew Always on my mind, Heart, Domino Dancing, It's A Sin and Go West. In 2017, I (re-)discovered their music and began to hear the singles first (and a few obscurities) before I came to the albums in a whole.

When I listened to Bilingual, I already knew Se A Vida E, Before and A Red Letter Day but the rest was completely new. And as time goes by, I became a fan of the tracks that weren't a single: To Step Aside, Up Against It and Metamorphosis.

Yes, the production falls flat, as some already mentioned, but Bilingual has some really good tracks. It's always a question of how you experienced them.

I have a slightly different take on Bilingual to most fans. My favourite tracks are Up against it and Discoteca. My least favourites are It always comes as a surprise and To step aside. I’ve always liked Metamorphosis, Electricity and Saturday night forever, and I really like the sequencing. It’s a great album.

Nightlife I think is their weakest album, although it does include my favourite single of theirs - I don’t know what you want but I can’t give it any more. Side two is particularly flawed.

Release I think is excellent and up there with their best.
Woof.
Top

Ive said it before and ill say it again.

However, N&C were on Radio 1 promoting the forthcoming Bilingual album and they played "Single" and a couple of collegaues and myself looked at each other and said "What is this shit?".

To this day, the first 4 tracks rarely get played, though Discoteca has grown on me. Ive never been overstruck on A Red Letter Day. Up against it gets bypassed and it ends after To Step Aside.

So the album becomes an EP for me of..

But 1996 musically I was more into electronic music (Orbital, Chems, Underworld, Leftfield) and drum and bass
Fishing
Top

The first two tracks kill it off for me, I mean why start and album with Discoteca, ugh

Nightlife added a track because of US record exec feedback I believe.
Top 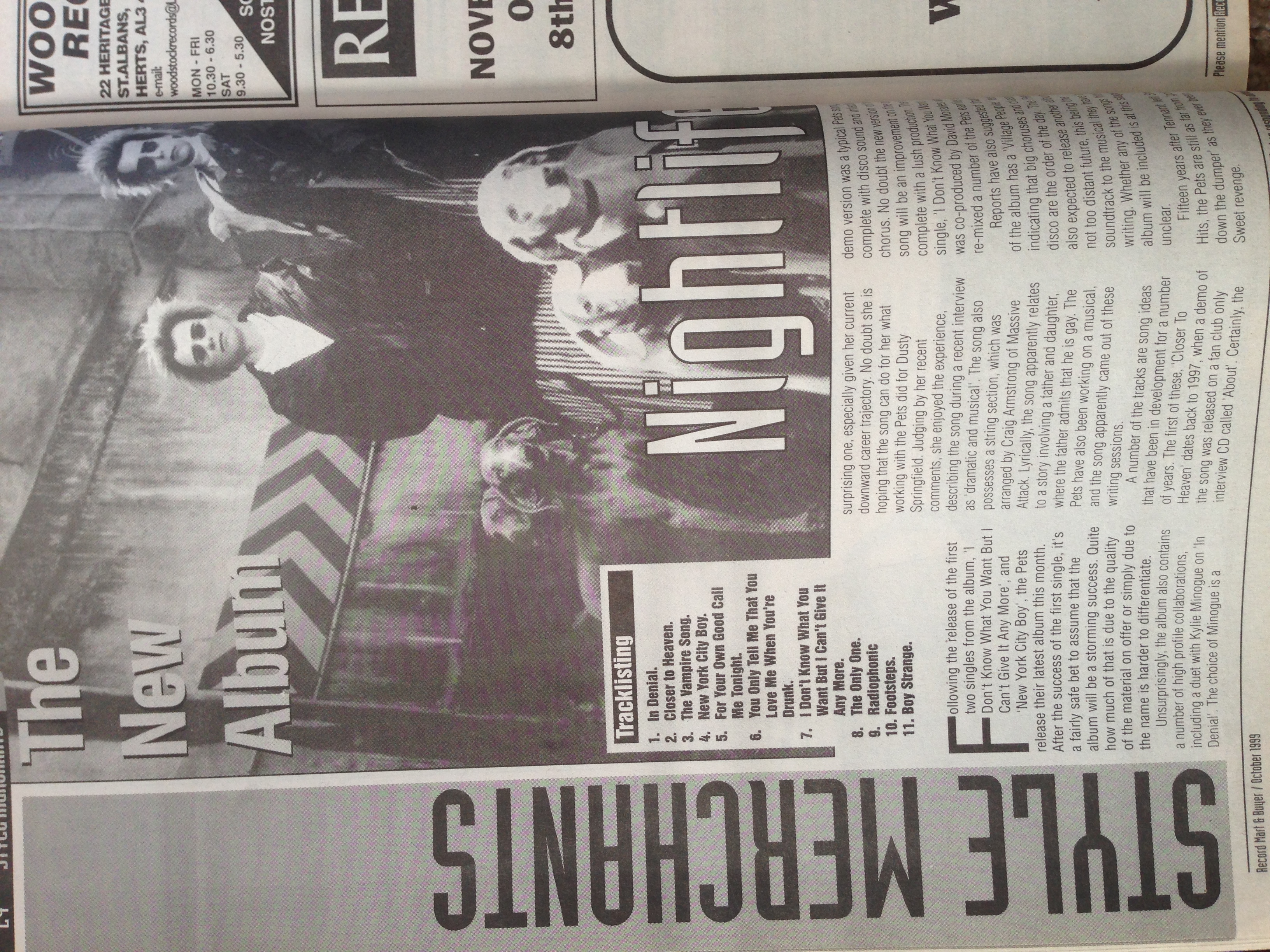 I love Bilingual. It's got a great start. They should've put their own extended mix of Discoteca on it (strangely a mix which is missing from the FL-disc).
Productionwise I think it's their most experimental album. There's so much weird stuff going on in several songs. It comes as a surprise is a surprise. The rapping on Metamorph. The samples and lyrics on Electricity. The Sheboom beats on several songs. The lyrical references to lots of disparate stuff in Europe. And Before which is two songs turned into on. etc etc.
The boys think the album is too long. I think it's too short. They could've added one or two more songs.
----
You've got me all wrong
Top

That track listing is bizarre. I'm not a huge fan of the album but at least it makes sense to open with For Your Own Good and Closer to Heaven, then close with Footsteps.
Top

Opening Nightlife with In Denial would have been unforgivable.
There is beauty in ugliness and ugliness in beauty.
Top

y3potential wrote: ↑Fri 23 Jul 2021, 12:07 am Opening Nightlife with In Denial would have been unforgivable.

So would've been Boy Strange as the last track.

I can't believe some people actually don't like Discoteca! The double-intro to this album is EPIC and the 1 thing that kept me coming back to it and willing to overlook all the clashy bits. I kind of wish they just narrowed their focus and made it decidedly latin pop from start to finish. While i can forgive it now, I remembered thinking at the time .. 'they just had to throw in a Russian Imperialist moment didn't they?'
Top
Post Reply
31 posts