One of the things I couldn't wait to ask you about was "Domino Dancing," the classic single you produced for the Pet Shop Boys in 1988. They are in my Top 3 favorite groups of all time, and I think that is one of their best tracks.

I was a huge fan of theirs as well!

Tell me about that collaboration and how it happened.

Someone from their label called me and asked if I would be open to working with them. I remember I almost fell off my chair when he asked me that. I was like, "Yeah, I would even do it for free!" [Laughs] I was being serious! When they came into the studio, they had the melody and lyrics already written, so I added the music, obviously, 'cause it doesn't sound like anything else they've ever done. I ended up doing a remix that was very much freestyle, but the original version doesn't sound like that.

I love the acoustic guitar solo on "Domino Dancing." Tell me about the studio musicians you used back then.

I was friends with all of the musicians from the Miami music scene. Jorge [Barcala] and Fro [Froilan Sosa] from the group Nuclear Valdez did a lot of work for me. The guitar solo on "Domino Dancing" was done by a local guy named Nestor Gomez. The trumpet solo on that song was done by Tony Concepcion. Whoever was available at the time of a session is who I used. But, yes, they were all Miami guys who I loved working with. I would seriously love to work with the Pet Shop Boys again.
Top

Thanks for posting Pete

Love Domino Dancing - in my top 10 of all time PSB songs.
you could say conventional ... and I could claim intentional
Top

also - decided to pick up learning the guitar during lockdown (not sure why I didn't choose the keyboard/piano but too far in now!)

you could say conventional ... and I could claim intentional
Top

Such a classic
Top

That's a nice read, thanks for posting

Sent from my SM-J410F using Tapatalk

Nice interview and a photo I hadn’t seen before. Thanks for posting.
Top 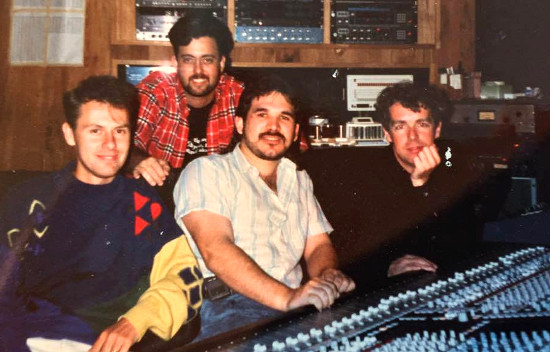 Very pleasant bits in this interview and a very nice song indeed!

Is the demo on the Introspective Further Listening from when he got involved or before, I wonder.
Top

OakeyDokey wrote: ↑Tue 08 Jun 2021, 11:47 pm Is the demo on the Introspective Further Listening from when he got involved or before, I wonder.

I should imagine it’s from before. Normally the boys present a producer with demos as a starting point. There wouldn’t seem to be much point making a demo with a producer.
Top

They recorded the demo version in Los Angeles.And straight after they went to Miami to record it, because they were so excited by the track.
Top
Post Reply
11 posts • Page 1 of 1