That signing looks like a "the more items signed the better" competition. It seems to me that what is really important is owning items instead of enjoying music. I sometimes wonder what being a fan is...
Top

Boy Strange wrote:Either that or selfish fanboys trying to get a thousand items signed twice.

well, you can exempt me from this as I only went round again to get just a couple of sigs from Neil to replace the smudged ones. I think this is what staff weren't trying to understand even though it was them who told me to go round again...

I think they understood you were being a free-loading pain in the ass and sent you to the back of the queue!

And you say you never believed in luck
Top

Technotrancemix wrote: At around 7pm, after interacting with a couple of fans (also signing a card presented to me by the crazy fan, Trixter), I fnally got some items signed -

Trixiemix wrote:Hey - if I'm crazy then so are you chummy!! Anyway I was asked by my friend Domino dancing to ask you to sign that card! Hey ho.....

Technotrancemix wrote:At around 7pm, after interacting with a couple of fans (also signing a card presented to me by the crazy fan, Trixter), I fnally got some items signed and spoke to Chris about the blue Can you forgive her? 7".

Trixie wasn't the one who re-joined the queue...

It was my first signing and it was interesting, mostly for the opportunity to meet up with a few people I always see posting on here. It was very nice to meet Trixie and her friends and Bigboy was as on-form as ever. I also willingly made a fool of myself by handing Neil a business card and telling him to give me a call if he was bored while in Edinburgh. He didn't seem too amused but I just said "you can't blame a boy for trying."

mantooth wrote:Trixie wasn't the one who re-joined the queue...

did I say that?

I've wondered the same thing Jose. I guess in every fanbase there are a core group of collectors whose two hobbies naturally mesh. Whatever, I don't worry about buying or finding rare items, I just want their music in whatever form I can find.
Top

I used to be a collector of PSB items, until the availability of everything on the internet ruined the fun of it. Now anyone with enough money can be a "great" collector and there is no such thing as rare tracks anymore now that they can just be downloaded.

I still occasionally buy things, but only particular items I consider essential to my collection (apart from every regular release, of course).
It was a cough that carried him off. It was a coffin they carried him off in.
Top

Jose wrote:That signing looks like a "the more items signed the better" competition. It seems to me that what is really important is owning items instead of enjoying music. I sometimes wonder what being a fan is...

Being a fan is basically putting in the effort to meet & greet the one's you enjoy the music from. And if you can get some things (which we pay good money for) signed to make it more personal to the one & only so be it.
I'm too weak to be strong
Top

Not a pic but a scan

I got my beloved score of PopArt signed: 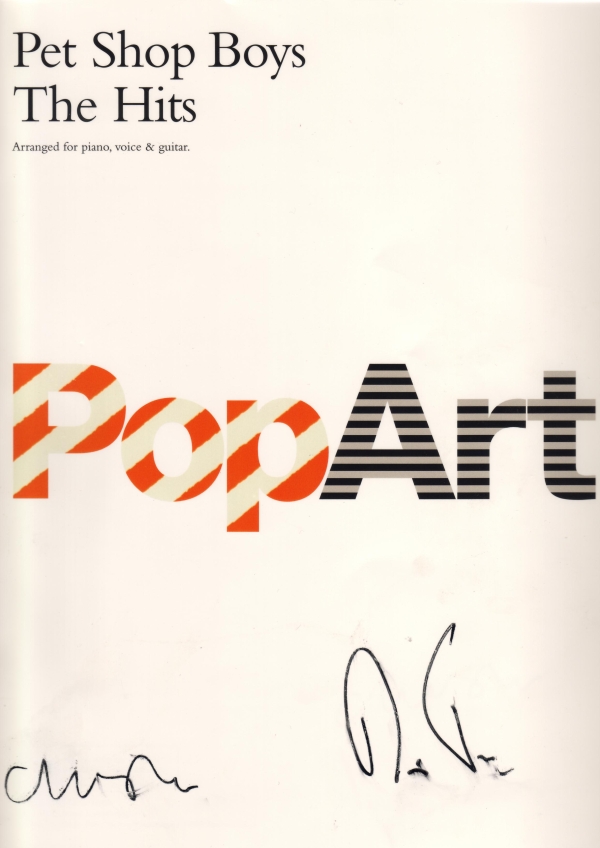 You can fly away to the end of the world
but where does it get you to?
Top

Thank you for posting!
www.erasure-petshopboys.org/forum
Top

hmm. give me the apres concert signings any day. I like the way they were (esp Neil) on such a high after the Washington, DC concert here, it permeated their behavior, made them uninhibited and happy and fun.

I don't like these pre-arranged things.....glad some of you went though. I guess no one took pics.
I wooooooooooooooood if I cooooooood...
Top

For those of you who were lucky enough to attend the book/Cd signing session, what question(s) did you ask the boys ?
I asked Chris "What about a 4th single from Fundamental ?"
Chris replied, laughing "What, another one". Priceless
I was going to ask Neil about the forthcoming UK tour but never got the chance. I was also going to Congratulate them for 20 years of pure & constant pleasure, but again never got the chance.
If only i could have ONE MORE CHANCE.
I'm too weak to be strong
Top

I was going to ask them a question (can't remember what now) but these things are always a bit of a 'Bum-rush' in and out a.s.a.p

I was kind of concentrating on how to hand them the 'special effects' Christmas cards I wanted to give them. I was honoured....and glad Neil looked and smiled, then I handed both the cards to Neil and he thanked me. There was no time for chitter chatter.
Back to Trafalgar.........
Top
Post Reply
60 posts